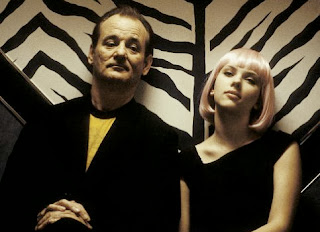 It's odd. There are quite a few things wrong with this extremely low-key character study about a rock-star photographer's neglected young wife (Scarlett Johansson, from the excellent "Ghost World") and a bored, past-his-prime movie actor (Bill Murray) who meet while both are staying at a Tokyo luxury hotel...but none of those flaws end up mattering.

Murray at first seems miscast in a role that probably should have gone to an actor with more graying-movie-star good looks, his character bounds from world-weary cynic to karaoke party-boy a bit too easily, and a few of his scenes seem too comedic to be in what basically is a quiet, lost-souls-finding-each-other drama...but his performance is genuinely enjoyable.

Johansson is such a good actress that we honestly believe she would enjoy hanging out with a guy old enough to be her dad (if not her granddad), which is crucial to the plot. A couple of scenes are genuine cliches (one of them involving Murray waking up with someone he does not at first recall going to bed with), but they are far outweighed by the ones that seem realistic and true. And while some of the "look how wacky the Japanese are" segments are borderline offensive, they seem in keeping with the perceptions of two Americans who are strangers in a strange land.

The pace is leisurely, there is remarkably little dialog, nothing blows up, nobody gets shot...hard to believe this is an American film, huh? "Lost in Translation" was written and directed by Francis Ford Coppola's daughter Sofia, making it one of the best advertisements for nepotism you'll ever see.

I really liked this one a lot, and not just because Scarlett Johansson spends so many scenes in pink panties. Really.