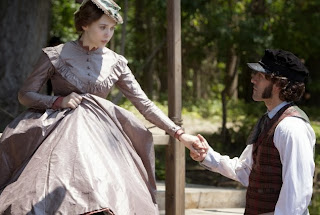 The impressively acted, well written and beautifully shot period piece "In Secret" manages to morph from a convincingly Dickensian coming-of-age tale into a grimly suspenseful film noir without getting too garishly gothic about it. Combining childhood deprivation, a passionless arranged marriage, forbidden lust, murder most foul and madness borne of remorse, this first-time feature by writer-director Charlie Stratton is a lushly melodramatic marvel.

Based on the Émile Zola novel "Thérèse Raquin" and a stage play adaptation by Neal Bell, the classically simple story centers on a pair of lust-struck 19th-century adulterers, and the criminal lengths to which they will go to be together.

Elizabeth Olsen ("Martha Marcy May Marlene") is the touchingly believable and fascinatingly moody Thérèse, raised in the French countryside by her father's sister Madame Raquin (Jessica Lange). Icy Auntie cares only about her sickly son Camille (Tom Felton), while her attitude toward Thérèse is summed up by the needlepoint admonishment "Don't Make a Sound. Keep Quiet."

Felton, heretofore best known as Harry Potter nemesis Draco Malfoy, is excellent at conveying the self-centered Camille's sense of innocence, immaturity and entitlement. Looking more like a lank-haired, pale and drawn Jonathan Pryce than the Hogwarts punk of yore, Camille takes an office job where he befriends the more manly, sly and swarthy Laurent ("Inside Llewyn Davis" star Oscar Isaac).

Before long, naughty Laurent and neglected Thérèse are hooking up for vigorous nooners above the dreary shop run by Madame Raquin while Camille is at work. Wanting to make their arrangement permanent, and hoping to acquire a nest egg as well, the lovers conspire to remove clueless Camille from the picture. And there their troubles begin.

Lange's commanding performance as Thérèse's regally obsessive mother-in-law encompasses emotions ranging from coolly dismissive cruelty to mutely tortured rage. Madame Raquin becomes a crucial player in the movie's Hitchcockian second half, where the atmosphere of dangerously illicit romance transforms into one of genuine foreboding that borders on horror.

The sometimes darkly comic supporting characters are as well cast as the leads. Among the Raquin family's friends who gather for weekly domino nights, Matt Lucas ("Little Britain") and Shirley Henderson (Moaning Myrtle in "Harry Potter and the Chamber of Secrets") shine as the rumbling policeman Olivier and his quietly undercutting wife Suzanne.

An enjoyably adult film that's almost sinfully entertaining, the well-crafted "In Secret" is one that should be sought out and shared.