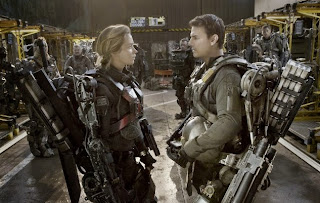 "Edge of Tomorrow," an inventively clever mashup of "Starship Troopers" and "Groundhog Day," is a just about perfect sci-fi adventure and a real showcase for stars Tom Cruise and Emily Blunt.

Cruise is Major William Cage, a slick former ad man whose wartime duties have been limited to enticing others to sign up for the losing fight against an Earth-invading alien race. When a disgusted general (Brendan Gleeson) decides to drop the very unwilling Cage into the action, everyone including Cage's fellow squad members assumes he will be a casualty in the first wave of their attack.

Instead, Cage gets slimed with otherworldly goo that puts him in a time loop. Each time he's killed, he wakes up the day before with the chance to learn from his mistakes.

That makes "Edge of Tomorrow" the ultimate example of a videogame flick, where all "game over" means is that Cage gets additional chances to start at the beginning and try advancing to a higher level. His goal is to find and destroy the equivalent of a videogame's outrageously powerful and well-protected "boss."

Blunt is tough-chick terrific as Special Forces warrior-heroine Rita Vrataski, previously caught in a time loop of her own, who acts as Cage's no-nonsense trainer and guide. She also kills him a lot. That's because if Cage is merely wounded or loses enough blood without dying, he also loses his ability to get endless do-over opportunities to save the planet.

Director Doug Liman ("The Bourne Identity," "Mr. and Mrs. Smith") brilliantly pulls off the feat of making Cage's literal cycle of violence endlessly fresh and excitingly entertaining. Some glimpses of Cage's lives last only seconds, others are extended "Saving Private Ryan"-style beachhead bloodbaths and a few take Cage and Vrataski on tangents far from the battlefield. Their ordeals include wartime action, suspenseful horror, tragic romance and even a trippy car chase, and all of it works.

The film's only fumble (aside from a regrettably generic title that sounds more like a TV soap opera than a science-fiction blockbuster) is a final-act twist that makes no logical sense in relation to the rest of the story's time-travel rules. While everything else about the dazzlingly smart screenplay (by Christopher McQuarrie, Jez Butterworth and John-Henry Butterworth, adapted from the novel "All You Need Is Kill" by Hiroshi Sakurazaka) hums like clockwork, this flub may make audiences wonder why the movie didn't end a few minutes sooner.

Fortunately, that unnecessary tag isn't enough to spoil what otherwise has the feel of a classic us-against-them SF tale. And even with a central gimmick that's identical to the one in "Groundhog Day," "Edge of Tomorrow" manages to seem not only thoroughly refreshing but worthy of repeat viewings, which seems rather appropriate.