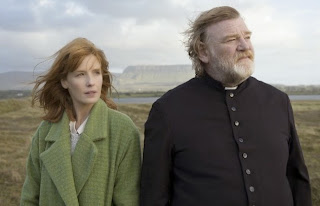 Kelly Reilly and Brendan Gleeson are daughter and father/Father in the excellent "Calvary." © 2014 Fox Searchlight

The miraculously good "Calvary," about a steadfastly moral Irish priest (Brendan Gleeson) who is threatened by a bitter molestation victim that he will be murdered in exactly one week, manages to be both a genuinely moving religious allegory and a sometimes darkly bitter black comedy.

Father James is informed while taking confession that he will be killed specifically because he is innocent of any wrongdoing, which will make the crime more horrific. He later tells his bishop that he has an idea who the would-be assassin is, but that he can't be certain of the man's identity.

There turn out to be plenty of likely candidates in his small seaside village, which seems to be populated exclusively by disbelievers, the openly disrespectful and the defiantly damned. The movie turns Britcom (or should that be sat-Eire?) convention on its head by making most of the cast's townspeople arrogantly unlikable instead of charmingly eccentric, but fascinating nonetheless.

Butcher Jack Brennan (Chris O'Dowd) may be beating his shamelessly philandering wife, whose adulterous lover Simon Asamoah (Isaach de Bankolé) is contemptuously hostile toward Father James' admonishments about adultery. Compassionless Dr. Frank Harte (Aidan Gillen) is viciously cynical about his patients and their loved ones. Wealthy newcomer Michael Fitzgerald (Dylan Moran) is an all-about-money drunk, police inspector Gerry Stanton (Gary Lydon) cavorts with a cartoonishly gangster-talking rent boy and loner Milo Herlihy (Killian Scott) is a partaker of "all possible forms of pornography" who can't decide whether to kill himself or join the army.

The movie's deadpan humor comes from watching the gruffly hopeful Father James grow increasingly exasperated with the flagrant carnality, brutality and stupidity of his flock, and wondering when he will reach his breaking point as the days count off. The film's serious business includes a chilling visit to an imprisoned serial killer (Domhnall Gleeson, the son of the movie's star), the administering of last rites to an accident victim and a couple of devastating criminal indignities that seem to be testing Father James' faith, and possibly his sanity.

On top of everything else, he has to convince visiting daughter Fiona (Kelly Reilly), the product of his marriage before he joined the priesthood, that her recent post-breakup suicide attempt was a bad idea. Their father-daughter chats are more conventionally sentimental than the rest of the film, but not every scene can be about somebody taking a leak on a Holbein the Younger oil painting.

Gleeson perfectly navigates Father James' faith-based journey from saintly forbearance to indignant outrage over his Job-like trials to a Christ-like acceptance of his personal destiny. He also believably acknowledges the priesthood's pedophilia-scandal sins without letting them turn him away from the church and its teachings. When he reassures a fellow priest that he likes him even though the man has no integrity, the line is simultaneously amusing, devastating and a neat summation of love-one-another forgiveness.

"Calvary" is the second pairing of Gleeson and writer-director John Michael McDonagh after their wittily clever 2011 buddy-cops send-up "The Guard." "Calvary" has far more heart than that outrageous antihero farce, however.

You'll be able to tell when you feel yours breaking.