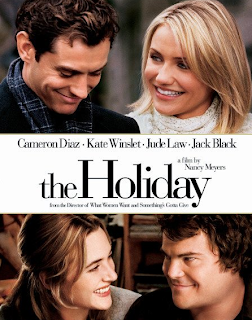 Mere words can't describe how much I hated, hated, hated the horrible, horrible "The Holiday." But I'll try below.
© 2006 Columbia

This cheesy, chuckleheaded chick flick is so relentlessly sappy, shamelessly insincere and insultingly stupid that I can't think of a Christmas movie I've ever liked less. And I've seen "Santa Claus vs. The Martians."

Cameron Diaz is mid-thirties going on retarded as an unlucky-at-love Hollywood workaholic. She screams a lot, she falls down, she's half independent businesswoman and half "can't remember to plug in the toaster" idiot. For Christmas vacation, she uses an online service to switch homes with a complete stranger who lives in London.

Said stranger would be the slightly frumpy newspaper reporter Kate Winslet, who has all the emotional sophistication and self-confidence of a dateless 12-year-old. She's in love with Rufus Sewell, who wants to keep stringing her along despite the inconvenience of his engagement to another woman.

Diaz ends up falling for Winslet's brother Jude Law. Law has a secret that is puke-worthily perfect for this kind of estrogen-amped wish-fantasy.

Winslet manages not only to free this old fart from his walker, but to cure his Alzheimer's after only a couple of dips in the backyard pool. Right.

Also, this is one of those movies that treats old men as if they are twinkly, infantilized eunuchs. Gramps expresses zero sexual interest in Winslet, even though her forwardness makes her seem as if she is actively angling to be his "young chippy," and even though we get the distinct impression that this widower Methuselah hasn't gotten laid in quite some time. Maybe it would have been asking too much to have him open his bathrobe and seductively reveal his withered old bone (which actually would have been funnier than anything we do see in this "comedy"), but the guy at least could have been allowed an appreciative leer or two.

"The Holiday" is nearly two and a half hours long long long, with a badly in need of tightening screenplay that veers from relentlessly boring to carelessly inept. Diaz goes into panic mode over driving Winslet's Mini Cooper on the left side of the road. She nearly sideswipes a truck, comes to a sloppy stop in town, then proceeds to drink with real purpose from a bottle of wine at a shop. Despite this setup, we never see her get back in the car for what promises to be an even more eventful drunken drive home.

Also, this is the kind of movie where characters "talk-type," voicing aloud the words they are composing on a computer keyboard. Shouldn't this cinematic device have been retired nanoseconds after the release of "The Net?"

Also, Winslet plays spasmodic air guitar in bed. And, God help us, there's even a scene of all the principals dancing around a dining-room table together.

"The Holiday" is as genuine as an aluminum Christmas tree, as warm as a video fireplace and as believable as Santa schtupping Sasquatch.