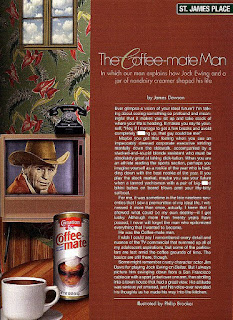 Illustration from the July 2000 issue of Penthouse Letters, where an expanded (and slightly naughtier) version of the article below appeared as the first installment of my monthly "St. James Place" column.


Ever glimpse a vision of your ideal future? I'm talking about seeing something so profound and meaningful that it makes you sit up and take stock of where your whole life is heading. It makes you say to yourself, "Hey, if I manage to get a few breaks and avoid completely fucking up, that guy could be me!"

For me, it was sometime in the late 1970s that I saw a premonition of my ideal life. I witnessed it more than once, actually. I knew that it showed what could be my own destiny, if I got lucky. Although decades have passed, I never will forget the man who epitomized everything that I wanted to become.

He was the Coffee-mate man.

I wish I could say that I remembered every detail and nuance of the TV commercial that summed up all of my adolescent aspirations, but some of the particulars are lost amid the coffee grounds of time. The basics are still there, though. Some might remember crusty character actor Jim Davis for playing Jock Ewing on "Dallas," but I always picture him swinging down from a San Francisco trolley with a coat over one arm, then strolling into a townhouse that had a great view. His attitude was serious yet amused, and his voiceover revealed his thoughts as he made his way into the kitchen:

Great apartment. Nice of Al to let me use it while he's gone. Hey, there's the coffee pot. Hmm, guess I'll have to drink it black. What's this? Coffee-mate non-dairy creamer. Well, it sure makes the coffee taste good. I'm gonna remember Coffee-mate.

For me, the commercial's true meaning had nothing whatsoever to do with coffee. The setting didn't matter, either.

What impressed me was that the ad featured a middle-aged man who looked financially comfortable, with no pressing cares or responsibilities. He could breeze into town to "use" a friend's empty place. He seemed at ease with his solitude, and even appeared to have some purpose that necessitated it.

The guy just had to be a writer.

This is pure supposition on my part, of course. Nothing was said in the commercial about the unnamed character's occupation. In those pre-laptop 1970s, he never scrolled a blank sheet of paper into a typewriter and rubbed his hands together, preparing to craft virile yet sensitive prose. He didn't etch notes in a stenographer's pad between pensive glances across the bay. And, although he was drinking, what he was drinking was coffee.

But other indicators were there. He had a somber, almost Zen-like demeanor. He didn't seem to be on a pleasure trip, but he obviously wasn't in town on business of the conventional-job variety. If he were, he would have been staying at a downtown hotel on an expense account.

He clearly was a writer of serious fiction who, although not yet successful on a mass-readership scale, had earned the regard of several important critics and sold quite respectably in university towns. His royalties were modest, but sufficient, because he lived simply: staying at friends' places when possible, and taking the trolley instead of a cab. He dressed well, and he had managed to put a little money away. He could take his time between novels and short stories.

When the Coffee-mate man entered my consciousness, I was still in my teens. In the many years after I first saw him hold a steaming mug to his lips, I went on to college and a succession of unrewarding editorial jobs at publications I never would have read by choice. Eventually, I realized that if I truly wanted to be like the Coffee-mate man—that shining paradigm of noble purpose known as the writer—I either had to resign...or resign myself to a lifetime of frustration.

Some people can hold down a job and write in their off-hours, but trying to make a dream come true in the minutes left over at the end of the day and on weekends never worked for me. Besides, relegating a life's calling to "hobby" status seemed wrong. It was like a slap in the rugged, timeworn face of the Coffee-mate man and everything he represented.

I left my job in 1989 to write for a living. Three years later, I relapsed into working for someone else again, but only so I could list an employer on a mortgage application. (Unless you happen to be Stephen King, and I'm guessing you're not, the designation "self-employed writer" doesn't much impress anyone who is selling a house.)

By that time, though, I was as addicted to the writing life as a java junkie is to his morning fix of caffeine. I quit again in 1994, and I haven't looked back since.

Honesty compels me to admit I don't have a life that is exactly like the Coffee-mate man's. Still, I can get paid for writing things like this story about the guy. So that's close enough, ain't it?

I originally thought I would end this soul-baring sentimental sojourn down free-lance freeway with something corny and catchy and motivational: "Becoming your own version of the Coffee-mate man is tough, but the first step is easy. All you have to do is wake up and smell the coffee."

But fuck that. I'm not here to play guidance counselor. I want to know if anybody can supply me with a copy of that damned TV commercial! I've been trying to hunt one down for years. I've visited the Museum of Radio and Television to pore through their records. I've contacted the parent company of Coffee-mate, as well as their former advertising agency. I even called the Screen Actors Guild for the address of actor Jim Davis' widow and sent her a nice note, all to no avail.

So, in closing, follow your dreams, fulfill your destiny and all of that happy horseshit. But more important, somebody find me that ad!

2015 Update: Thanks to the Internet, I finally was able to see the Coffee-mate commercial again—and you can, too. Just click this link.