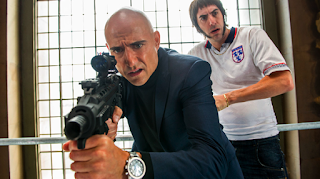 The hilariously outrageous "The Brothers Grimsby" is so gleefully, jaw-droppingly crass that it may set a new standard for what an R-rated comedy can get away with. Going far beyond "laugh out loud," this salaciously silly secret-agent spoof is so dangerously funny it may result in streaming tears, shortness of breath and actual incontinence.

Like star and co-writer Sacha Baron Cohen's previous oddball incarnations Ali G, Borat, Bruno and others, the no-filter Nobby Butcher is ridiculously crude yet constantly oblivious to his own impropriety. While Nobby grew up in England's loutishly lower-class Grimsby, the "Twin City to Chernobyl" where citizens proudly self-identify as scum, his separated-since-childhood younger brother Sebastian (Mark Strong) has grown up to become a lethally sophisticated James Bond-type, albeit one bald enough to be mistaken for Vin Diesel.

The two awkwardly reunite at a very public event in which Nobby accidentally causes Sebastian to give "Harry Potter" star Daniel Radcliffe AIDS, which is a clue as to how politically incorrect the gags here can get. The movie also features on-screen scrotum-sucking, a beard made of pubic hair and anuses so enlarged they whistle like pan pipes in a breeze. That's entertainment!

Nobby and Sebastian spend most of the movie pursuing an assassin and trying to determine the identity of his mass-murder-minded master. What happens when they escape detection in South Africa by hiding inside an erotically irresistible elephant is so preposterously explicit and sensationally sophomoric that it borders on the obscene. If you're not laughing like a maniac, it may be because you've passed out in shock.

One refreshing aspect of the movie is that it's so cheerfully British, with offhand humor targets ranging from pub culture hooliganism to storming the pitch. A joke about the biggest crime syndicate in the world ("What, she runs FIFA?") is likely to sail over many Americans' heads like a bicycle-kicked football of the non-pigskin variety.

Although director Louis Leterrier may be best known for helming the first two "Transporter" films, a couple of first-person-shooter action bits here are so frantic that a lot of what's in them goes by too fast to appreciate, but that's a minor complaint.

Rebel Wilson appears as Nobby's large and lusty significant other, Isla Fisher is Sebastian's bespectacled and beautiful contact back at HQ and Penélope Cruz is the head of a philanthropic organization with a mission to cure all diseases (because why not?).

Nobby's eventual realization that "this killing people is a right laugh" when he picks up a gun and begins firing away shows that no target is off limits in this literally balls-out extravaganza, which also gets laughs from jokes about a sex offender, a heroin trafficker, elephant semen and Donald Trump.

Oh, and it's also about the importance and joys of family. Really.