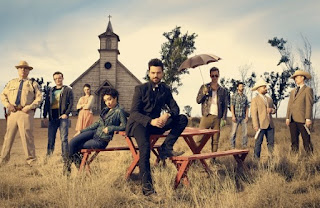 The AMC network's "Preacher" TV series debuted with an impiously pointless pilot that couldn't have disrespected its source material with more compromised disregard if it had been produced by Pontius Pilate. Fans of the original comics on which the show is based will regard this version as a blasphemously debased abomination, while this slow-moving Sunday disservice will be as boring as church for newcomers, even with the occasional brawl.

The 1990s "Preacher" comic-book series by writer Garth Ennis and artist Steve Dillon was outrageously violent, gleefully irreverent and full of bizarrely colorful characters that included debauched angels, the advice-dispensing ghost of John Wayne, murderous rednecks, mine-dwelling cannibals and a secret worldwide military organization devoted to laying the groundwork for Armageddon. Where the TV pilot dawdled away its time in what may as well have been called Dullsville, Texas, the first issue of the comic started out like a house on fire (or a church, actually), with an epic high-body-count supernatural showdown, some shockingly Bible-black humor and a side trip to a not-sufficiently-high-security Heaven.

In the comics, title character Jesse Custer is a smalltown preacher who has been beaten down, broken and brainwashed into taking that job by his mother's insanely savage family, who executed his former Marine father for trying to get Mom away from their clutches. When the spiritual offspring of an angel-demon union inhabits Jesse's body and wipes out his congregation, he goes on a road-trip quest to make God pay for his crimes against humanity.

Joining Jesse are his good-with-guns ex-girlfriend Tulip O'Hare, on the run after botching her first assignment as a hitman, and the nearly century-old alcoholic Irish vampire Cassidy, who was unexpectedly enlisted as her getaway driver.

The TV adaptation, which seems intent upon throwing the baby out with the holy water, gets so many things wrong that's it's hard to know where to begin. Jesse (Dominic Cooper, more soporific than smoldering) has become the son of a preacher, which alters the context of one of the few lines of dialog that survives from the comic. When Jesse is told by his father in flashback that he has to be one of the good guys because there are "too many of the bad," the advice changes from secular common sense advice to a hokey homily. In a similarly wrongheaded change, the humiliating barroom beatdown that Jesse suffers in the comic goes exactly the opposite way on TV, where Jesse becomes an almost superheroic one-man wrecking crew.

The most infuriating alteration involves the momentous occasion in which Jesse's body is overtaken by the angel-demon's spirit. In the comic, this occurs during one of Jesse's sermons, resulting in an explosive inferno that incinerates his entire congregation. In AMC's version, it happens when Jesse is alone in church at night, with no literal or metaphorical fireworks whatsoever.

Tulip (a smirky-sassy Ruth Negga), bafflingly race-changed from blue-eyed blond in the comics to black onscreen, also has been transformed into a cartoonishly MacGyver-style action hero who can improvise a bazooka out of tin cans and duct tape.

As Cassidy, Joseph Gilgun does the best job of retaining his comics character's irresistibly likeable Blarney-Stone bluster. His TV incarnation apparently is on the run from unknown pursuers, however, which adds an unnecessary unfinished-business complication to an already elaborate story that didn't need another non-canonical subplot.

Executive producers Seth Rogen and Evan Goldberg, who developed the series for TV and co-directed the pilot episode, are apparently misguided disciples who have expressed their devotion to the comic and yet managed to subvert and betray it in nearly every way possible. Two of the three main characters are mishandled, supporting ones (such as Sheriff Hugo Root, no longer a frothing and maniacal racist) fare even worse, and new characters (including a Flanders-like congregant and an apparently amour-minded church assistant) are uninteresting. Even fan-favorite supporting player Arseface (Ian Colletti) gets toned down, transformed from a monstrously freakish and unintelligible unfortunate who is so grotesque that he literally makes people throw up when they see him into a guy with an admittedly anus-puckered mouth but no other deformities.

The last comics-to-TV adaptation this completely disappointing was Fox's "Lucifer," which turned that heady, heretical and sometimes horrific fallen-angel fantasy into a smirking buddy-cop waste of airtime. Just as I never returned for another episode of that show after its pilot, because I didn't want my memories of the far superior printed version tainted by such an inferior impersonation, I won't be back in the pews for more "Preacher." These days, there are too many good things on TV to waste time watching one of the bad.