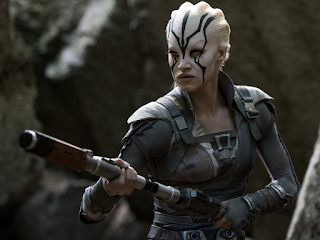 Sadly, co-screenplay writer Simon Pegg, who also plays Enterprise engineer Montgomery Scott here, got it right when he penned this line of dialog for his character Tim Bisley on the 1990s Britcom "Spaced": "It's a fact, sure as day follows night, sure as eggs is eggs, sure as every odd-numbered Star Trek movie is shit." "Star Trek Beyond" is number three in the rebooted series. (What spoils this clever reference, of course, is that the 2009 J.J. Abrams-directed "Star Trek" was all-around excellent despite being the first of the new batch, and therefore an odd-numbered one.)

There are so many annoying things wrong with this installment that even the snazzy visuals, an appealing new character and one genuinely funny bit ("What's your favorite color?") can't make up for the script's shortcomings. The idea that adventure-loving Captain Kirk (Chris Pine) would apply for a desk job as a vice admiral instead of soaring the spaceways is impossible to swallow. So is the premise that someone apparently forgets about a crashed but easily fixable starship for over 100 years, and that a hazardous space route we're informed is impossible for any existing ship but the Enterprise to navigate presents no apparent difficulties later for an older and far less sophisticated vessel.

Most of the actors seem bored or embarrassed. Zachary Quinto's Spock wig is distractingly bad. An action bit with what would be an extremely antique motorcycle is off-puttingly silly. And even on a starbase with what we're told are millions of residents (many in Starfleet uniform), apparently the only people who can take action to do anything to prevent their mass extermination are the half-dozen main members of the Enterprise crew.

Also, there's something very Monica-Bellucci-getting-her-face-violently-ruined-in-"Irreversible," or Edward "I felt like destroying something beautiful" Norton in "Fight Club," about having to watch the Enterprise suffer the equivalent of a devouring and dismembering when attacked by multitudes of might-as-well-be space piranhas. Another decade, another planetfall for another crippled Enterprise.

Knowing that transporter technology exists in the "Star Trek" universe makes many scenes illogical, to say the least. When anyone can be beamed anywhere...or snatched from anywhere if they're in peril, such as in the film's finale...it makes no sense that this technique isn't employed.

When I mentioned this to someone after a screening, he reasonably replied, "Well, yeah, but that would ruin almost every 'Star Trek' story." So I guess fans are cool with it.

"Star Trek Beyond" isn't shit. But with Pegg behind the keyboard, it should have been a lot more "not shit."