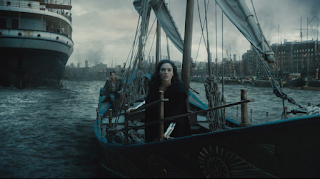 The main thing you'll wonder is why so many scenes in DC superhero movies always look this blue-gray bad.
© 2017 Warner Bros.

Way too much of "Wonder Woman" is as dull, ugly and tedious as most other Warner Bros. DC Comics movies, which proves that a female director can do just as bad a job as any man when it comes to botching the studio's consistently miserable superhero flicks.

This is the first big-budget costumed caper helmed by a woman (Patty Jenkins, directing her first theatrical feature since 2003's "Monster"), apparently thanks either to "only a female should get this assignment" sexism or, ironically, the studio's fear of being labeled sexist if the job of bringing such an iconic female hero to the screen had gone to a man. (Disney/Marvel is guilty of the same identity-politics hiring, tapping a woman to co-direct its upcoming female "Captain Marvel" and a black man for its "Black Panther.") The studios admittedly are in a can't-win situation on films like these, risking accusations of pandering on the one hand or insensitivity on the other, but that's the modern world for you.

The screenplay, however, is an all-male mess, scripted by Allan Heinberg from a story by Heinberg, Jason Fuchs and producer Zack Snyder, whose dismal blue-gray aesthetic dominates far too many scenes. As soon as the action shifts away from a colorful first-act fantasy island full of Amazon warriors, the rest of the film looks as gloomy and bleak as Snyder's thoroughly unpleasant WB directorial efforts "Man of Steel" and "Batman v Superman: Dawn of Justice."

The movie retains many of the basics of the comic-book character, identified here only as Diana and never as Wonder Woman, although events have been time-shifted backward to occur during World War I instead of World War II. That change is unnecessary and a little insulting to the 76-year history of the character, even if it does allow references to things like women's suffrage and early-20th-century gender inequality. A stranger alteration from Wonder Woman creator William Moulton Marston's 1941 original: Instead of being given life by the Greek goddess Aphrodite after being sculpted from clay (just go with it), the movie's Diana was given life by Zeus. If the whole point of the character and this movie is female empowerment, why taint her with owing her existence to a dude?

Gal Gadot, who first appeared as the character in the aforementioned and awful "Batman v Superman," does a Schwarzenegger-bad acting job with a similarly awkward accent that's apparently supposed to sound exotic. Stripper skinny yet with an impressively large breastplate, she's as emotionally convincing as a catatonic Kardashian.

The scenes on the hidden and lushly beautiful island Themyscira are the most enjoyable parts of the movie, before pilot Steve Trevor (Chris Pine) crash lands offshore and brings the problems of the outside world along with him. After impersonating a young-bro version of William Shatner's Captain Kirk in three "Star Trek" movies, Pine seems to have adopted that amiably smirking boyish persona fulltime. That means his Trevor doesn't seem mature or, frankly, manly enough to serve as a good opposite-sex counterpart to Diana.

As a spy for the allies, he has stolen a German notebook with the formula for a deadly new gas. The best example of how the screenplay wanders off track: Instead of taking the notebook directly to his superiors (bearing in mind that he believes it is so important it could change the course of the war), Trevor first takes Diana to a London dress shop for a "Pretty Woman" style montage as she tries on various outfits. That kind of thing might work if this were an episode of the tongue-in-cheek 1970s Lynda Carter TV series, but it seems painfully dumb here. There's also an unwelcome final-act twist that somehow manages to seem both ridiculously random and yet completely predictable.

Other plot complaints: The Amazons are presumably immortal (Diana is the only child on the island, and she was sculpted from clay), but they can be killed by bullets. Also, a single minor wound Diana sustains on the island heals with near Wolverine speed (maybe clay's the trick), but she's never significantly wounded on the far more brutal battlefields of war later, when that ability not only would come in handy but make for a more striking visual. Imagine if German machine-gunners had the common sense to shoot at her legs when she was using her shield to fend off bullets aimed at her body, for example. Even the wearyingly endless hero-beatdown against the god of war himself at the end barely musses her hair.

The main problem, though, is that nobody in the movie expresses an adequate sense of shock or awe when they see Diana do the sort of supernatural feats that should make them wet themselves, fall to their knees or doubt their sanity. Trevor, his ludicrously multi-cultural compatriots (there's even a Native American!) and a village full of townspeople see Diana do things like make a five-story leap and completely demolish a bell tower where a sniper is hiding. From their pleased but nowhere near agog reaction, though, you would think they had witnessed nothing more astonishing than an impressive field-hockey goal. Even if nobody calls her "Wonder Woman," there still should be a sense of wonder.

Man, woman or child, the main thing most people are likely to wonder after seeing this wasted opportunity is whether Warner Bros. ever will figure out how to make a comic-book movie that works.