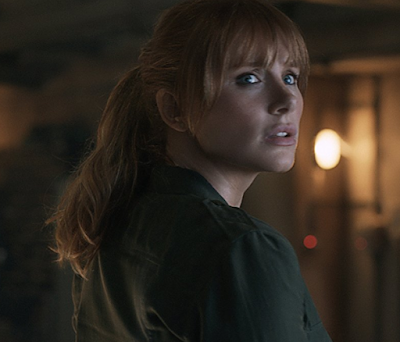 The radiantly lovely Bryce Dallas Howard. There also are dinosaurs in this movie. ©2018 Universal

The serviceably entertaining but sometimes frustrating “Jurassic World: Fallen Kingdom,” the fifth film in the franchise, may be a little too evolutionary for its own good. Even though stars Chris Pratt and Bryce Dallas Howard are back for only their second outing and not exactly long-in-the-tooth fossils, they are supplemented by a pair of stereotypically annoying millennials who are about as welcome as Poochie the rapping dog on “The Simpsons.”

Franklin Webb (Justice Smith) is a delicate tech-nerd of color who flagrantly overdoes the insect repellant and is given to shrieking hysterics. Zia Rodriguez (Daniella Pineda) is a snarky and tatted-up dinosaur doc in big plastic glasses who actually proclaims herself to be a “nasty woman” at one point. Presumably intended to attract more vaping and Tide-pod-eating ticket-buyers, these two regrettably are not early casualties of rampaging carnivores.

The radiantly lovely Claire Dearing (Howard), operations manager at Jurassic World until the park was overrun by its un-extincted inhabitants in 2015’s “Jurassic World,” now lobbies on their behalf as head of the Dinosaur Protection Group. An active volcano on the creatures’ island threatens to wipe them out, a possibility that has sign-carrying triceratops-huggers demonstrating in the streets for the US government to intervene.

The crawl at the bottom of MSNBC footage of those protests proclaims that the planet is “Warming at a Pace Unprecedented in 1000 Years,” and that the “President Questions Existence of Dinosaurs in the First Place.” Later, when Toby Jones shows up as a cynically evil auctioneer selling off illicitly obtained dinosaurs to arms dealers, big pharma reps and a cartoonish Russian, his hair bears a curious similarity to that of our current commander-in-chief. Subtle!

Jeff Goldblum cameos as Dr. Ian Malcolm from the first two “Jurassic Park” flicks, rationally explaining during congressional testimony that letting nature take its course by destroying the unnaturally revived dinosaurs would not be such a bad idea. Washington agrees.

Fortunately for the imminently endangered species, Claire is summoned to the mega-mansion of wealthy Benjamin Lockwood (James Cromwell). As the former partner of Jurassic Park’s creator, he wants to bankroll a private rescue mission. Claire next enlists retired raptor trainer Owen Grady (Pratt), after some beer-drinking banter about who left whom when their relationship ended sometime between the last movie and this one. With Franklin and Zia along for the ride, they’re off to Isla Nubar.

Wheatley (Ted Levine), the military-demeanored expedition leader in charge there, is the kind of heartlessly cruel bastard who yanks a tooth from each captured specimen as a personal souvenir. Claire, Owen and their younger appendages have to deal with Wheatley’s malicious secret agenda, treacherous lava flows, flying volcanic boulders and a thundering stampede of thoroughly convincing CGI dinosaurs.

Unfortunately, the remainder of the movie takes place during a single dark and stormy night back at Lockwood’s mansion, where the surviving dinosaurs have been relocated. This has the effect of diminishing the story’s scale in two ways. First, the newly created most-dangerous-ever hybrid that is supposedly a step up from the last installment’s Indominus rex is compact enough to chase its prey into spaces as small as a bedroom. Although you still wouldn’t want to come face to face with the thing in an enclosed space, less definitely isn’t more, when it comes to getting maximum bang for your prehistoric-beast buck.

Also, isolating the action to a single (although admittedly large) building in the middle of nowhere doesn’t exactly live up to the “World” part of the title, which implies more global goings-on. As the second part of an intended trilogy, this one suffers from “middle movie syndrome,” with an open-ended finale that promises bigger things next time around.

Director J.A. Bayona adequately handles the action, but a silly popcorn movie like this seems like a waste of his talents. It doesn’t have the wrenching emotional impact of his disaster drama “The Impossible,” the low-key psychological horror of his “The Orphanage” or the stylish dark-fantasy creepiness of his “A Monster Calls.”

The screenplay (by Derek Connolly and “Jurassic World” director Colin Trevorrow) throws in a cute little girl (Isabella Sermon) as Lockwood’s precociously precious granddaughter Maisie, who becomes the designated child-in-peril this go-round. Housekeeper Iris (Geraldine Chaplin) seems to be the only person on staff at the impressively massive mansion besides Lockwood’s right-hand man Eli Mills (Rafe Spall), which seems unlikely. Even more unlikely: When Owen, Claire and Maisie are being pursued through the mansion’s museum wing by the new-and-improved Indoraptor, allegedly the most lethal hunter on Earth, Owen decides that turning out all of the lights is a good idea. Huh?

Although the likeably amusing Pratt stands astride both this fantastically profitable franchise and Marvel’s “Guardians of the Galaxy” blockbusters, Howard once again is the heart of these new “Jurassic” jaunts. Her Claire is so sweetly sincere, endearingly earnest and slightly naïve that she seems almost angelic. Even Owen feels compelled to mention that her skin looks nice. She’s also so un-waif-like womanly that it’s a shame she hasn’t suited up as a superhero herself. Plus she gets to wear sensible shoes this time out, and even they look good. But I digress.

It should be noted that what presumably are supposed to be a dinosaur parent and one of its offspring are allowed to remain together in the same cage after being captured, which should endear the bad guys to real-world immigration activists. The film’s villains may be viciously mercenary and dangerously maniacal, but at least they aren’t complete monsters. Have I got that right?

Also, be sure to stay until the credits end for a final scene that sets up the next installment. Nearly everyone had walked out by the time that bonus played at the screening I saw. Have these people learned nothing by now? Evolve, humans!