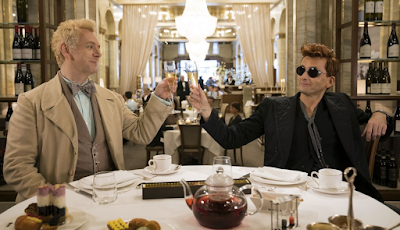 This achingly unfunny romp would have to butch up to be considered even "twee."

I disliked Amazon Prime's adaptation of the Neil Gaiman and Terry Pratchett novel "Good Omens" so much that I not only couldn't bear watching more than the first episode, but also had no desire to think about either version long enough to write a proper full-length review. Not that I was disposed to enjoy it before tuning in. Although I am a huge fan of Gaiman's "Sandman" comics and his solo novels "Coraline" and "The Graveyard Book," I consider "Good Omens" to be one of the very worst books I ever bothered finishing. Also, I have yet to see any movie or TV adaptation of Gaiman's work that I thought was any good, having been left cold by the likes of "Neverwhere," "Stardust," "Mirrormask," the movie version of "Coraline" and the unwatchably dreadful "American Gods." As a result, I include below only the two-sentence Facebook comment I posted the night after I watched the first painfully unamusing installment of "Good Omens." Maybe the series got better after that episode, but I won't be wasting the time to find out.

Amazon Prime's "Good Omens" is the equivalent of a fifth-rate Douglas Adams knockoff that resembles in style what "Lemony Snicket's A Series of Unfortunate Events" might look like if it weren't any good. In other words, judging by episode one, the series appears to be extremely faithful to the Terry Pratchett & Neil Gaiman book, which I hated.