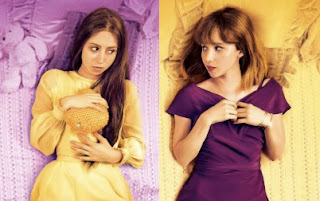 Zoe Kazan does double duty as identical twins in "The Pretty One." © 2014 Sony

Plain and frumpy Laurel stayed home with their widowed father while stylish and confident Audrey left for the big city. A hospital mix-up after a makeover and a traffic accident gives Laurel the chance to assume her sister's identity, attend her own funeral and get an inside look at how her other half lived.

Like a differently spelled Zooey of the Deschanel variety, Kazan is good at playing the sort of flustered but endearing woman-child who is sweet enough to pull off acting like a 12-year-old without being too sickening about it. Also, Laurel's no-pressure love interest Basel is played with easygoing likability by Jake Johnson, co-star of Deschanel's TV series "The New Girl."

Wallflower Laurel's sheltered smalltown life hasn't prepared her to deal with things like the demands of upscale Audrey's married lover or career as a real estate agent. Laurel's only work experience back home involved trying to follow in dad's footsteps by making not-very-good copies of famous paintings to sell.

A running sight gag involves Laurel's very not-right rendition of the Mona Lisa, which she takes with her when she assumes Audrey's identity. Noting the painting's weird upturned smile, Basel notes that this Mona "looks like she's got plans for the weekend."

Laurel's relationship with Basel, the nice but previously ignored tenant in the other half of the duplex Audrey owned, unfolds with just the right amount of falling-in-love preciousness. Impersonating the sister that she discovers was regarded as a "bee-yotch" by Basel before the switch, Laurel adopts yet another level of role-playing by pretending she and Basel are part of a mythically perfect fictional family called the Browns. Don't worry, it's not as confusing as it sounds.

Ron Livingston is suitably nasty as Audrey's bad boyfriend, and Frankie Shaw is sleekly sexy as a slightly skeptical coworker charged with getting the "amnesiac" Audrey back up to speed when it comes to selling houses.

The movie also offers an interesting take on the perils of reinvention. Laurel's announcement that "I don't really feel like myself" obviously has more than one meaning in this context. Later, she admits, "I don't even know what the real me looks like."

Any movie based on a deception like Laurel's eventually has to include a scene where the truth hits the fan, as it were. "The Pretty One" accomplishes this with a clever plot twist that turns the unlikely fairy tale into something a little closer to earth.