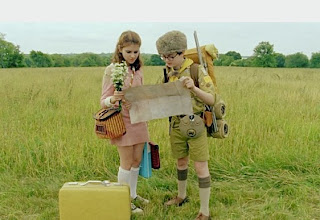 Absolutely perfect. This charmingly stylish and sneakily sentimental comedy is this year's equivalent of "The Artist": an offbeat oddity that unexpectedly turns out to be universally appealing. It's a quirky art film that's also feel-good funny.

Director Wes Anderson, who co-wrote the movie's sweetly skewed screenplay with Roman Coppola, has created a drily irresistible 1960s period piece that's first-love nostalgic yet amusingly detached. Sam Shakusky (Jared Gilman) and Suzy Bishop (Kara Hayward) are coolly confident 12-year-old outcasts in love. He's an articulate anti-authority orphan who Shawshanks his way out of scout camp. She's a withdrawn loner upset about finding a "Coping With the Very Troubled Child" pamphlet at home. They run away together on a postcard-perfect New England island, pursued by parents, police and a posse of weapons-wielding scouts who have to be told that"this is a non-violent rescue operation!"

Hayward is delightfully deadpan as Suzy, whose idea of outdoor roughing-it attire is an orange minidress, white knee socks and "Sunday school" saddle shoes. For provisions, she brings along a suitcase full of stolen library books, a battery-powered record player with albums ranging from Françoise Hardy to Saint-Saëns, lefty scissors and cans of kitten food for her cat. Despite her nearly perpetual pout, she's reliably game for adventures, escapes and even awkward acts of amour.

Gilman is hilarious as the bespectacled and coonskin-cap wearing Sam, who notes that one of his former foster families didn't believe he accidentally built a fire while sleepwalking. When he turns his head and spits after his first kiss, he assures Suzy that's only because he had sand in his mouth. Hayward's appealingly underplayed self-assurance and Gilman's flawless comic timing make it hard to believe that both make their professional acting debuts here.

Adults in the cast include Edward Norton as Scout Master Randy Ward, whose rigidly regulated but ridiculously hazardous camp activities include fireworks-making, ant-burning and the construction of a preposterously unsafe treehouse. Bearded Bob Balaban is an omniscient narrator, while Anderson regulars Bill Murray and Jason Schwartzman appear as Suzy's disheveled father and a wonderfully sleazy scout-camp profiteer.

A likably low-key Bruce Willis is Police Captain Sharp, who is having a secret affair with Suzy's bullhorn-wielding mother (Frances McDormand). When the officiously heartless official known only as Social Services (a screwball-snippy Tilda Swinton) tells Sharp what will befall Sam when the boy is found, Sharp faces a crisis of conscience about the rescue operation.

As production-design gorgeous and visually distinctive as Anderson's earlier works (which include "Fantastic Mr. Fox, "The Darjeeling Limited" and "Rushmore," "Moonrise Kingdom" has more heart than anything the director has done. It's also a cleverly assembled cinematic treat, with split screens, one-second cutaways and a terrific montage of segments from Sam and Suzy's letters to each other. The movie's lushly photographed Rhode Island scenery encompasses a storybook-picturesque forest, stream, rocky hills and secluded beach cove.

The meaning of the movie's title is revealed in the film's final shot, referring "Chinatown"-like to both an actual place and a magical state of mind. And be sure to stay through the end credits, during which Gilman voices "Young Person's Guide to the Orchestra"-style narration about the movie's excellent Alexandre Desplat score.

This is the first film of 2012 that I have given a five-star rating, and I can't imagine seeing a better movie this year.