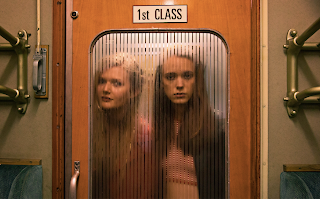 As its title makes pretty obvious, director-writer Lars von Trier's "Nymphomaniac Vol. 1" has plenty of sex, some of it extremely explicit. What's unexpected is how much humor and heart are included with the humping, making this one of the most fascinating and enjoyable films of the year.

Charlotte Gainsbourg, previously seen in von Trier's haunting end-of-the-world nightmare "Melancholia" and darkly disturbing psychodrama "Antichrist," is the narrator and main character Joe. Middle-aged stranger Seligman (Stellan Skarsgård) discovers Joe lying battered in a rainy alley and takes her to his apartment, where she dispassionately recounts detailed episodes of her sexual history. Her story unfolds in flashbacks, most of them featuring willowy British model Stacy Martin portraying Joe from her teens into her twenties.

Martin, in her first acting role, does an excellent job of portraying the angelically lovely Joe as nearly emotionless on the surface but with the calculating determination of a predator. Her appetite for sex is voraciously unrestrained but relentlessly unromantic; she appears to get little out of the act besides a sense of vaguely empowered accomplishment.

What makes the movie transcend its patently porny "slutty schoolgirl" setup is the stylish way it takes salacious scenes in amusingly strange directions. After Joe relates details of a carnal competition with another girl to see how many strangers each could seduce during a train ride, Seligman compares her strategy and tactics to those in Izaak Walton's fly fishing manual "The Compleat Angler." Seligman reacts to the tale of Joe and some likewise lascivious young ladies forming a lay-them-and-leave-them club by noting that their "Mea Vulva Mea Maxima Vulva" chant employs what musicologists refer to as "The Devil's Tritone." And when Joe specifies the precise number of thrusts employed during the two stages of her deflowering, Seligman points out that those are Fibonacci Numbers, a term he then helpfully explains.

When Joe reaches the point where she's balancing a fulltime job with taking on seven or eight lovers a night ("scheduling was tricky"), an incident that might have made for maudlin melodrama is played instead as deadpan comedy. The jilted wife (Uma Thurman) of one of Joe's lovers brings her three young sons to Joe's apartment to show them things like the "whoring bed" ("Let's see Daddy's favorite place!") that has destroyed their family. The beyond-awkward encounter turns out to be hilariously cringe-inducing.

At the opposite end of the spectrum, Joe's close relationship with her father (Christian Slater) comes to a poignant end in a stark and uncynical black-and-white segment of the film. The fact that this emotionally draining chapter ends with a shockingly inappropriate physical response from Joe somehow makes it even more tragic.

Despite Joe's refusal to associate "the secret ingredient" love with sex, she finds herself pining for her immature and obnoxious first lover Jerôme (Shia LaBeouf, affecting an English accent). When Jerôme reappears in an unlikely plot development, Seligman wryly comments, "I don't know if I can believe this."

Similar clever touches include diagrams depicting concepts ranging from the Pythagorean theorem to parallel parking, split screens showing three lovers who represent the elements of a Bach chorale prelude and a brief tangent about the character-defining qualities of cake forks. Those entertainingly heady conversational digressions are a genuine treat.

The reminiscing Joe may be seeking outrage, condemnation, disgust or maybe absolution from Seligman, who functions as therapist, confessor and confidante. She seems astonished that he not only remains pleasantly nonjudgmental about her libertine lifestyle, but occasionally even encourages her shameless behavior ("If you have wings, why not fly?").

One last word about the film's graphic sexual content: While Martin as Joe is naked a lot, a credits disclaimer notes that none of the principal actors engaged in anything "penetrative." Anatomical prosthetics, computer effects and adult film stars employed as body doubles create the completely convincing illusion of various illicit acts.

The most shocking thing about the film isn't its art-porn excesses, however, but the way it makes a not-so-heartless-after-all character like Joe so interesting, vulnerable and appealingly human. Turns out that nymphomaniacs are people, too.