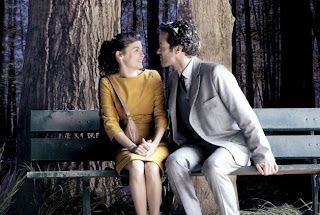 Audrey Tautou and Romain Duris get in the "Mood Indigo." © 2013 Brio Films

Director/co-writer Michel Gondry's dense and dazzling "Mood Indigo" is so outrageously overloaded with imaginative settings, fantastic situations, dreamlike dramatics and appealing animation that you'll wish your French were better. That way, you wouldn't have to glance away for even a second from this madly marvelous movie's thousand-and-one visual wonders to read the subtitles.

That's not to say this latest offering from the inventive mastermind who helmed "Be Kind Rewind," "Eternal Sunshine of the Spotless Mind" and "The Science of Sleep" (along with more recent misfires "The Thorn in the Heart" and "The Green Hornet") will be to everyone's taste. Frequently as frantic as a Frankified "Pee-Oui's Playhouse," its over-the-top eccentricity and sheer energy can be almost overwhelming. Also, the way Gondry gradually shifts tone from screwball goofy to sadly grim may alienate as many viewers as it intrigues.

Colin (Romain Duris) is a childlike and comfortably well-off bachelor whose latest invention is a pianocktail maker, a piano that creates cocktails in response to the music played on its keys. His apartment is crammed full of eye-popping oddities including an alarm bell that wanders spider-like around a wall until it is smashed into multiple smaller versions of itself, a mouse-sized man in a mouse costume and faucets that spout living eels.

He learns that his friend Chick (Gad Elmaleh), who is ruinously obsessed with the philosopher Jean-Sol Partre (sic), has begun dating the niece of Colin's affable and endlessly accommodating cook Nicolas (Omar Sy), who also happens to be Colin's lawyer and "mentor." Colin reacts to this news by impetuously stating, "I demand to fall in love, too!"

Enter Chloé (the elfin and always enchanting Audrey Tautou), who soon is soaring over Paris with Colin in a crane-lifted cloud contraption and journeying with him to an underground forest. Their romance later includes a go-kart rally that ends up in a cathedral, a see-through wedding limousine, a robot jet and a picnic on a very neatly bisected rainy and sunny day.

Meanwhile, a roomful of assembly-line typists may be writing the lovers' story (and possibly everyone's) on typewriters that endlessly move past them on rails. Like several other aspects of the movie, this is both storybook strange and slightly disturbing.

The plot turns dark when Chloé contracts an illness from a stray snowflake that makes both music and a water lily grow in her lungs. His funds depleted by Chloé's mounting medical expenses, Colin is forced to enter the working world by taking employment at a firm that's like something out of a surrealist nightmare, then takes another that's arguably even more soul-deadening. The final act also includes arson, suicide, murder and a pauper's funeral that a priest guarantees will be "a dreadful service."

Gondry skillfully morphs what starts out as bizarre black humor into genuinely affecting poignancy. The movie's downbeat ending is all the more affecting precisely because it retains the fable-like quality of a fairytale, albeit one tragically robbed of its happily-ever-after.

This hyperactive, often nonsensical yet unexpectedly moving film is so exotic and unusual that it may be too rich, sugary or ultimately bitter for some tastes. But those with a liking for the unconventional will savor it as if it were a perfectly prepared pianocktail.