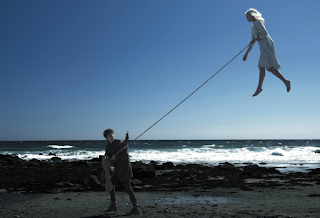 Director Tim Burton returns to fantastic form with the imaginative and appealing "Miss Peregrine's Home for Peculiar Children." It's a more fabulous—as in "fable-like"—version of the Marvel Comics X-Men movies, but with a "Harry Potter"-style hero's journey and similar secret-world weirdness. There's also a bit of "Groundhog Day," some "Pan's Labyrinth"-ian creatures, and even a "Raise the Titanic" moment. How can a combination like that not be fascinating?

Eva Green is Miss Peregrine, guardian of a gothic mansion's worth of children of various ages with individual talents that include super-strength, invisibility, firestarting and making plants grow really large very quickly (which comes in surprisingly handy). They're all hidden in a time loop in 1943 to avoid detection by the theatrically nasty Barron (Samuel L. Jackson), who wants to exploit the magic of shape-shifting Miss Peregrine and other peculiar-child-protectors like her to give him and his equally evil friends immortality.

Florida teen Jake (played by the young-Bud-Cort-reminiscent Asa Butterfield) has been told tales about Miss Peregrine and her charges since childhood by his grandfather Abraham (played with unexpectedly earnest low-key sincerity by Terence Stamp), who says he once lived with them. Jake has come to regard those stories as nothing more than made-up fairy tales, until he sees an other-worldly creature near the site of Abraham's untimely demise. With the approval of the psychiatrist he ends up seeing in order to deal with that trauma (Allison Janney), Jake and his disbelieving father (Chris O'Dowd) journey to Wales to find the actual children's home, and hopefully attain some closure.

The screenplay by frequent comic-book-flick writer Jane Goldman ("Kingsman: The Secret Service," "X-Men: First Class," "Kick-Ass"), adapted from the novel by Ransom Riggs, is at its best during the first two-thirds of the movie, which take Jake from hopeful outsider skeptic to take-charge team leader. Things go from played-straight-for-a-storybook seriousness to sillier action antics in the final showdown, however, turning bad-guy Barron from viciously dark to almost comic. That change in tone is unfortunate, but not enough to spoil such a terrific tall tale, especially when a clever last-minute wrap-up provides a pair of perfect twists.

Like most Burton films, "Miss Peregrine's Home for Peculiar Children" is full of Wonderland-worthy characters, settings and special effects. Lighter-than-air Emma (Ella Purnell), who has to wear weighted shoes to keep from levitating skyward, is Jake's slightly melancholic introductory guide to all things peculiar. In one of the movie's best-looking scenes, she takes Jake to a sunken ship full of the skeletons of its former passengers. Eva Green's Miss Peregrine is a pipe-smoking and deadpan Mary Poppins, albeit one who doesn't require an umbrella to fly. Finlay MacMillan's Enoch, the surly and dismissive bad boy of the group, is like the nasty neighbor kid in "Toy Story" who had a penchant for creating cobbled-together creepies.

Supporting characters include a pair of boys who amusingly describe themselves as "the sickest rappers in Wales." What's also amusing is the way another movie's worth of events are hastily described in a last-minute montage.

One caveat: I've never been a fan of 3D, mostly because 3D glasses often make movies look annoyingly dark, and this one definitely has that problem. Unless you're addicted to the novelty of 3D, save your money and see this one in 2D, which presumably will be brighter and more enjoyable to watch.