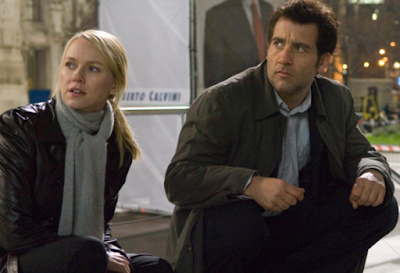 Note: This review originally appeared on a shall-remain-nameless website that has now purged all movie reviews in an apparent attempt to rebrand itself, so I am re-posting it here.

With a hopelessly generic title and nobody under 35 in the cast, "The International" looks at first glance like box-office poison. Those aren't the only things that give cause for commercial-prospects concern. It's a paranoid-conspiracy thriller about getting the goods on a bad bank. There is no comic relief. The leads not only keep their clothes on, they never even kiss. Also, there are no car chases, snappy one-liners or pop songs.

Granted, there is a huge shootout that Swiss-cheeses the Guggenheim Museum. But aside from that extremely out-of-place example of endless-ammo overkill, the movie plays more like a tense novel about corporate intrigue than a jumped-up superhero videogame.

A movie for and about adults? What was the studio thinking?

The good news is that this expertly crafted throwback to films like "Day of the Jackal" and "The French Connection" is so suspenseful and interesting that it feels convincingly classic. At the same time, Eric Warren Singer's smart screenplay -- in which a character explains that "the true nature of the banking industry is to make us slaves to debt" -- feels uncomfortably contemporary.

Shoulda-been-Bond Clive Owen is excellent as Louis Salinger, a relentless Interpol agent who watches one of his colleagues drop dead after meeting a would-be informer from a shady multinational bank. That's not the first time the money managers have taken deadly retribution, but it is one setback too many for the permanently seething Salinger. Seems he was roadblocked once before when he was on the verge of taking the bank down, and he is not about to be stymied again.

His partner in crimefighting is Manhattan Assistant D.A. Eleanor Whitman (Naomi Watts), the more level-headed of the two. Just when their inquiries turn up proof of the bank's role in everything from an assassination to a nation-toppling arms deal, pressure from higher-ups threatens to stop their investigation cold. That's because, as elderly bank associate Wilhelm Wexler (Armin Mueller-Stahl) puts it, "everyone's involved."

Watts doesn't have much to do except look concerned, but Owen and Mueller-Stahl are perfectly cast. Owen's Salinger is the kind of frustrated but doggedly determined obsessive we can believe would spend days without sleep to get his man. Mueller-Stahl's former East German secret police Colonel Wexler has a calmly untroubled exterior that hides decades of sins and sad regrets.

Director Tom Tykwer, best known for his stylishly flashy "Run Lola Run" and lushly sensual "Perfume," uses a more straightforward and restrained style here that is suited to the police-procedural material. Well, "restrained" except for the way over-the-top Guggenheim firefight, anyway. That high-powered run-and-gun showstopper is the most gloriously choreographed shoot-em-up set-piece since, well, Michael Davis' absurdly violent "Shoot 'Em Up" (which also happened to star one Clive Owen).

Appropriately for a movie titled "The International," the film was shot in several European countries as well as the United States. A pursuit scene through Istanbul's Grand Bazaar and across the city's rooftops is one of the most memorable. The impressive cinematography is by regular Tykwer collaborator Frank Griebe.

The movie's release amid the current global economic meltdown either is perfectly or disastrously timed. Audiences are predisposed to root against nasty bankers right now…but who needs to be reminded that bankers are nasty?