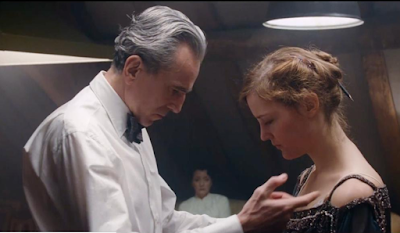 The premise of director/writer Paul Thomas Anderson helming a tastefully sophisticated semi-gothic romance about a dictatorial dress designer in mid-1950s Britain sounds unlikely enough to be the followup to SNL's skit about a Wes Anderson horror flick. Instead, the lovely, hypnotic and intriguingly unpredictable "Phantom Thread" turns out to be one of the best films of his career.

If that description makes this sound like an off-puttingly stuffy good-for-you exercise that only pinkie-extended patrons would appreciate, fear not. While it admittedly is no comic-book thrill ride, the film is so accessibly elegant that even a pop-trash fan who can't help noting the resemblance between star Vicky Krieps and Leighton Meester of "Gossip Girl" can enjoy it. (Ahem.)

Three-time Best Actor Oscar winner Daniel Day-Lewis (who received one of them for his raging brilliance in "There Will Be Blood") says this will be his final film role. If so, he definitely is leaving on a high note, as the solemnly tyrannical and casually cruel London dressmaker Reynolds Woodcock. The domineering designer has a disturbingly codependent relationship with sister Cyril (Lesley Manville), a serious dead-mother fixation, and an apparent habit of discarding female companions who probably would be misdescribed as lovers. Referring to the latest one dismissed by his disregard, he notes, "I simply don't have time for confrontations."

His fancy is struck by the nearly half his age Alma (Krieps), a meekly placid waitress with a slight foreign accent of indeterminate origin. Although she plainly is not of his class, misplaces a step in the hotel dining room and later wears too much lipstick for Reynolds' taste, Alma is no cartoonishly uncouth Eliza Doolittle. That's because "Phantom Thread" is more "Rebecca" than "My Fair Lady," with the imperious and humorless Cyril standing in for nasty Mrs. Danvers.

When Alma's increasingly distracting presence threatens to result in another Reynolds re-set, the film takes more than one intriguingly decadent, completely unexpected and satisfyingly original turn.

Day-Lewis perfectly portrays Reynolds' desperate dignity, shameless self-absorption and prideful dedication to his craft. One of the few times Reynolds shows genuine vulnerability is when he is hurt to learn that a longtime client has taken her business to a more "chic" competitor.

Krieps is excellent at both teasingly concealing and later revealing Alma's hidden depths. And Manville is icily officious in her attempts to keep her brother undisturbed by the bothersome inconveniences of being human.

Exquisitely made and fascinatingly entertaining, this is one of the year's best films.