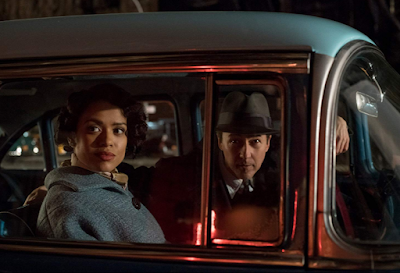 "Look, it's a theater showing 'Joker.' Let's go in and see how I should have played this role."

The Three-Sentence Lazy-Critic's Review: In "Motherless Brooklyn," Edward Norton is so laughably unbelievable as a guy with "movie Tourette's" that his performance is the embarrassing opposite of Joaquin Phoenix's thoroughly convincing "Joker." What makes the comparison even more unfortunate is that Norton's character twice says "I got a condition," bringing to mind Joker's "I have a condition" card. Both characters also have supportive and adoring black girlfriends...yet we are supposed to think the one in "Motherless Brooklyn" isn't a wish-fulfillment fantasy, which defies all credibility.