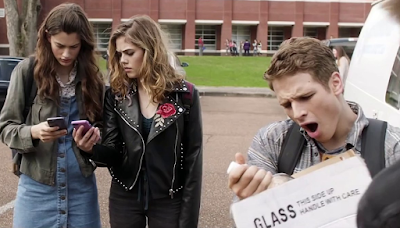 I hated this movie so much that I only mentioned it as a rude aside within my review of the excellent "Brightburn." Unfortunately, I had to cut that paragraph because both "Ma" and the equally lousy "Godzilla: King of The Monsters" had review embargoes. Those embargoes now have been lifted, so here is my very curt critique of them both:

"Brightburn" arrives in theaters a week before two other teen-centric popcorn flicks, but beats both of them hands-down by having interesting characters, an actual story, and plenty of legitimately creepy moments. The cheap and painfully stupid horror dud "Ma" comes across like zero-effort, no-commitment junk that everyone involved knew was a waste of time when they were making it. At the other end of the spectrum, the bloated-budget mountain of garbage known as "Godzilla: King of the Monsters" is more than two deafeningly moronic hours of bad acting and dismally lit CGI monster battles. Both of those bombs were so tiresomely worthless I couldn't bear the prospect of writing full-length reviews of either (so this paragraph will have to suffice).