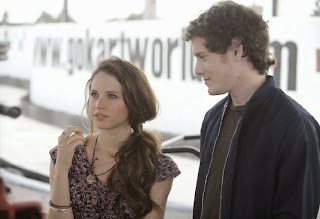 Felicity Jones and Anton Yelchin are in love "Like Crazy." © 2011 Indian Paintbrush

"Like Crazy" is an irresistible bittersweet romance about falling in love and the more difficult process of staying in love. Its main characters’ joys, frustrations, confusion and yearningly desperate hopefulness ring so true that this may be the most honest portrayal of a budding relationship at the movies this year.

Felicity Jones, the innocent Miranda in Julie Taymor’s re-imagining of last year’s "The Tempest," is excellent as Anna, an immature British student at a California college. Brainy but socially unsophisticated, she expresses her interest in classmate Jacob (Anton Yelchin) by leaving a heartfelt “please don’t think I’m a nutcase” note on his car’s windshield.

While most movies would mishandle a moment like that by overplaying Anna’s awkwardness, director/co-writer Drake Doremus pulls it off by making us believe she really is sufficiently “not a girl, not yet a woman” to do such a thing. Similarly, the movie’s sometimes sparse and largely improvised dialog has a natural credibility, complete with long pauses, sudden pivots and at least one notable non sequitur. (Trying to get Anna to pay attention to him, Jacob at one point shifts conversational gears by calmly stating, “I saved a cat from a tree once.”)

The couple’s dating, go-karting and beachgoing days fly by until the end of the semester, when Anna’s student visa requires her to fly back to England. As obsessively and righteously in love as a hormone-addled teenager, she announces that she would rather stay in bed with Jacob all summer. The outcome of that decision is shown in a clever rapid-fire slideshow of the couple in dozens of sleeping positions and outfits over the next two months.

Trouble arises when Anna visits her parents before the new school year starts and returns to the United States. Not allowed through US customs because of her earlier visa overstay, she is sent back to England.

The rest of the movie chronicles Anna’s lengthy attempts to get a new visa, Jacob’s not fully satisfying trips to see her in London and whether their long-distance relationship can survive.

What may sound like a “glamorous problems of the upper crust” trifle is surprisingly low-key and down to earth. At one point, Anna’s mother even mentions the prohibitively high cost of Jacob’s trips from America. And when the two parted young lovers eventually stray, their infidelities seem inspired more by sad resignation than “love the one you’re with” lust.

Another refreshing aspect of the story is that the surrogates Jacob and Anna find are not manipulative villains. Jacob hooks up with a cute coworker named Sam (Jennifer Lawrence) who never goes the psycho-shrew route. In London, Anna becomes more than friends with Simon (Charlie Bewley), an apparently decent bloke who isn’t a secretly deceitful Lothario.

One flaw is that although Anna and Jacob are computer savvy, neither seems to have heard of video-chat services such as Skype. Anyone these days who has a distant significant other could see their beloved on a daily or even hourly basis at no cost if they wanted. Anna and Jacob still could have drifted apart, but depriving them of a logical method they could have used to keep in closer touch seems contrived.

That’s a minor complaint. The rest of "Like Crazy" is so intimate, appealing and first-love familiar that anyone who ever had a heart is likely to recognize something of themselves in it.