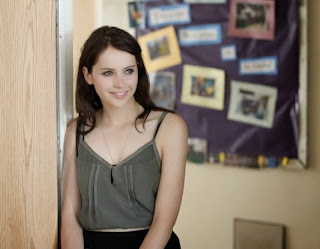 The literally irresistible Felicity Jones stars as an enticing exchange student in "Breathe In." © 2013 Indian Paintbrush

When the wife of a mopey middle-aged high school teacher gets her first look at the stunningly beautiful 18-year-old British exchange student who will be living with them, she really should turn toward the camera and apologize profusely for having to spend the next hour pretending she has no inkling that anything adulterous might occur.

Hubby is Keith Reynolds (American-accented Guy Pearce), a bearded former garage band guitarist who now spends his days as a bored suburban New York piano instructor. Moonlighting as a fill-in symphony cellist, he dreams of making that position permanent and moving back to the Big Apple.

His asexual and undercutting wife Megan (Amy Ryan), whose pregnancy derailed Keith's dreams of being a musician nearly two decades ago, would rather keep the family in their ridiculously large but somehow affordable-on-a-teacher's-salary country house. Almost-18 daughter Lauren (Mackenzie Davis) is a trophy-winning member of the swim team, the family has squab-serving rich friends whose waterfront manor has a pier and a pool, and housing prices in Manhattan are outrageous. Case closed.

Enter enticing outsider Sophie, a barely legal Londoner played by the ridiculously attractive Felicity Jones ("The Invisible Woman," "The Tempest"). Although Keith acts so uninterested in the nubile newcomer that he never so much as glances in her direction during their first meal together, it doesn't take a Nabokov to figure out he won't remain indifferent for long.

Jones, who also starred in "Breathe In" director-cowriter Drake Doremus' 2011 low-key love story "Like Crazy," portrays Sophie as an appealingly melancholy waif who seems fully aware of her pouty sex appeal but slightly embarrassed by it. The quiet Raymond-Carver-reading and Chopin-playing prodigy doesn't fit in with Lauren's crudely all-American high-fiving and partying crowd. Feeling a sensitive-artist kinship with Keith, she eventually allows herself to be caught up in an almost excruciatingly tender can't-help-ourselves interlude as they play a side-by-side keyboard duet.

Wanting to feel creative, spontaneous and inspired again, Keith's initial ambivalence toward Sophie gives way to yearning "you don't seem as young as you actually are" adoration. If his decision to spirit her away from school one day for an afternoon of lakeside lounging seems needlessly reckless, chalk it up to the heart wanting what the heart wants.

Unfortunately, "Breathe In" hyperventilates into soap-opera excess at its crescendo-of-coincidences climax, when the hand of a disapproving God seems to intrude on the lovers' well-laid plans. That's too bad, because up to that point it's been pleasantly excruciating watching these variously frustrated characters go through an awkward dance of denial, desire, realization and resentment.