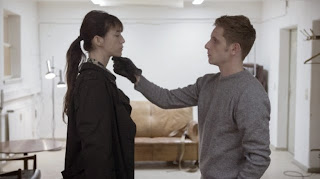 The sequel to director-writer Lars von Trier's explicit and excellent "Nymphomaniac Vol. I" is a darker and sadder walk on the wild side, but one with so many interesting things to say about human sexuality that it's another must-see experience.

The first "Nymphomaniac" ended with Joe, played by Charlotte Gainsbourg as a beating victim recounting her life story and by Stacy Martin as Joe's younger self in flashbacks, suddenly unable to feel sexual pleasure after years of rampantly uninhibited promiscuity.

"Nymphomaniac Vol. II" picks up immediately after that moment of panic, which has shock-blocked Joe's joyously carnal reunion with her first lover Jerôme (a Brit-accented and not bad Shia LaBeouf).

Simmering with frustrated resentment but realizing that he might need help feeding the appetite of his "tiger," Jerôme gives Joe permission to seek sensual sustenance elsewhere. Joe's first attempt involves putting her hair up and donning glasses for a virginal piano-teacher look, faking car trouble and then selecting which not-entirely-good Samaritan might be able to start more than her engine.

One questionable aspect of the film, which is presented in titled chapters like its predecessor, is that Martin only appears as Joe in the opening segment and first chapter here. Although the next chapter takes place only three years later and there is a 19-year age difference between the actresses, Gainsbourg takes over as Joe at that point for the remainder of the flashback scenes.

Aside from obvious age and facial differences, there's a more important reason why the movie worked better with Gainsbourg playing only the narrator role. Because that older incarnation of Joe is telling her often outrageous tales to the sometimes skeptical listener Seligman (the perfectly cast Stellan Skarsgård), seeing her younger self embodied by a blankly model-perfect waif provided a clear and clever divide between harsh reality and Joe's possibly enhanced reminiscences.

That's not to say Gainsbourg doesn't do a heartbreakingly good job of conveying Joe's depressing downward spiral into physical and psychological abuse. Joe's relationship with a disturbingly detached sadist named K (a surprisingly effective Jamie Bell) becomes so agonizingly addictive that it puts her child's life at risk, in a snowy balcony-peril scene that echoes the opening of von Trier's "Antichrist." K's businesslike calm somehow makes his casual brutality ("there is no safe word; nothing you can do will make me stop") more chillingly excruciating than if Bell had played the character as a wild-eyed monster. And, oh yes, there will be blood.

Whether Joe reaches a form of enlightened empowerment or succumbs to rationalizing self-delusion, which is something audiences may debate, she eventually claims the nymphomaniac label as a badge of honor. Her knowledge of how to push men's buttons later ends up making her an effective enforcer "on the shady side of the debt collecting business" for an underworld figure (Willem Dafoe, Gainsbourg's "Antichrist" costar). When Joe reluctantly agrees to groom a neglected 15-year-old girl (Mia Goth) as her successor, the decision predictably leads to even more depravity and degradation.

The film's full-frontal nudity, unconventional sex and painfully realistic beatings may set off "sick, sick, sick" alarms in the sensitive. There's also no denying that Joe is shockingly self-involved, if not utterly amoral. But she's also unforgettable, thanks in large part to the ongoing interplay between Joe the storyteller and Seligman her one-man audience.

As in the first movie, Seligman offers numerous odd tangential asides that are like witty footnotes to Joe's recollections. His references to Zeno's Paradox, Christianity's Great Schism of 1504, Beethoven's fugues, Freud's concept of polymorphous perversity and Noah's laughing son Ham give those segments a fascinatingly wide-ranging "My Dinner With Andre"-like charm.

There's also a surprising amount of deadpan humor. When Joe claims that she levitated during her first orgasm and saw a vision of what turned out to be the Great Whore of Babylon and the wanton wife of the Roman Emperor Claudius, Seligman deadpans, "Are you making fun of me?" After Seligman compares the sadist K's rope work to a mountaineer's invention of the Prusik knot, Joe drily remarks, "I think this was one of your weakest digressions." And when Joe describes an act called "The Silent Duck," in which the fingers and thumb are pressed together to resemble a duck's head and then inserted where the sun don't shine (as they say), Seligman grins, "One hardly dare imagine 'The Quacking Duck.'"