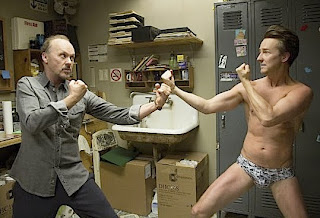 Directed and edited to look as if the entire movie is a single extended shot, the technically dazzling "Birdman" is a bitter black comedy that soars when it's satirical but sinks when it's soapy. Cleverly scripted barbs about self-absorbed actors, agenda-biased critics and Hollywood's obsession with costumed superheroes do a satisfying job of pricking easy targets, but some soul-bearing moments about the madman behind the mask are so mawkish they nearly clip the movie's wings.

Michael Keaton is insecure actor Riggan Thomson, the former star of three blockbuster Birdman movies who is seeking thespian legitimacy by writing, directing and appearing in a Broadway version of Raymond Carver's "What We Talk About When We Talk About Love." Mentally, however, Thomson never left his most famous and lucrative role behind. Haunted by Birdman's gruffly insulting voice in his head whenever he's alone, he seethes with self-loathing and doubt while fantasizing that he has destructive paranormal abilities.

What's odd about watching Keaton in this role is that he seems miscast despite a real-life résumé that includes playing Batman twice in movies that made a ton of money before he gave up the cape. In a reality-folding-back-on-itself paradox, however, he's not very convincing as a former superhero precisely because he seemed to be a bizarrely inappropriate "what was Tim Burton thinking?" choice to play one in our own world. For all of its insider references and in-jokes, "Birdman" misses an opportunity to address the issue of whether Thomson (like Keaton) ever made sense as a superhero in the first place, which would have added an extra layer of complexity to the character.

In fact, it's hard not to wonder how much more interesting "Birdman" would have been if Thomson had been played by someone who not only looked comic-book superheroic but possessed more impressive acting chops. Picture square-jawed Jon Hamm angsting and agonizing in the role while enduring Thomson's various embarrassing humiliations, for example, to imagine how much more believably "Birdman" could have hovered between tragedy and farce.

Keaton plays Thomson as a tightly wound ball of frustration and anxieties, barely keeping it together during play rehearsals and previews. His onstage castmates include Ed Norton doing a terrific and sometimes hilarious job as Mike Shiner, an obnoxiously brilliant theater actor whose performances are more real to him than his actual life; the excellent Naomi Watts as an insecure actress (and Shiner's live-in) who will be making her Broadway debut; and Andrea Riseborough as Thomson's unappreciated co-star and taken-for-granted girlfriend. Emma Stone is Thomson's resentful and disrespectful fresh-out-of-rehab daughter, and Zach Galifianakis is his harried manager who also serves as the play's very put-upon producer.

Lindsay Duncan has a small role as a viciously petty New York Times theater critic determined to give Thomson's play a fatally negative review even before seeing it, because she regards film stars as spoiled children "handing each other awards for cartoons and pornography." When Thomson insists that he is a real actor, she corrects him by noting, "You're a celebrity."

Director/co-writer Alejandro González Iñárritu and director of photography Emmanuel Lubezki do a stunning job of making the entire movie play as if it were filmed as a single uninterrupted take, often pulling off camera moves that appear magical even in today's CGI-can-do-anything world. Nearly all of the action takes place inside, in front of and on top of the St. James Theater. Aside from a few going-through-doors shots, possible edit points are impressively hard to spot. Overcoming the lighting challenges of this endeavor alone should be an award-worthy achievement, because the movie looks great throughout. "Birdman" also has an unusual but effective score (by Antonio Sanchez) that mostly consists of agitatedly jazzy drum solos.

Things run on a little long for what basically is a one-joke plot, and some melodramatic final moments that follow what could have been a more interesting earlier ending feel unnecessary and unfortunate. Still, there's so much else to like about this intriguing and sharply written flight of fantasy that it easily overcomes a bumpy landing.