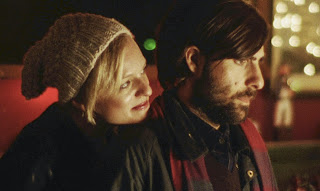 Elisabeth Moss and Jason Schwartzman are a less than perfect couple in "Listen Up Philip." © 2014 Tribeca Film

The casually dismissive Philip Lewis Friedman is a dissatisfied-with-everything Brooklyn author whose second novel is about to be published in an indeterminate electric-typewriters-but-no-cell-phones era. Impatient and ill-tempered, he seems intent upon alienating nearly everyone in his personal and professional spheres, but is so entertaining about his empathy-free egomania that his absence is sorely felt whenever he isn’t onscreen.

That presents a problem when the film shifts focus to segments devoted to Philip’s taken-for-granted live-in girlfriend Ashley Kane (“Mad Men”’s Elisabeth Moss), and the at first seemingly older-and-wiser writer Ike Zimmerman (Jonathan Pryce), whose country home Philip uses as an extended-stay retreat. Watching Ashley find her own identity and Ike fester in frustration provides tangential insights into how Philip has affected their lives, but it’s hard not wishing the story’s star would get back onstage ASAP.

Eric Bogosian delivers the movie’s well-written voiceover narration with just the right amount of coolly smug detachment, perfectly complementing Philip’s smarter-than-you-and-knows-it arrogance. Announcing his plan to spend the summer upstate without Ashley, Philip says, “I hope this will be good for us, but especially for me.” After taking a job as a creative writing instructor, Philip shuts down a friendly overture by stating that he’s “not getting involved with anyone in a human way.” When asked later if he only wants to be seen as a talented writer and not as a real person, it’s no surprise that his answer is “yes.”

Schwartzman paradoxically makes Philip’s brand of misanthropy charming by playing him as a joyless and often disgusted ball of barely contained rage. That makes the movie’s humor undeniably dark, with occasional moments that take rudeness in an absurd direction. Philip inattentively plays with an automatic stapler on his office desk while a student asks for an internship recommendation letter. As a bizarre consolation after he refuses that request, Philip tells the mildly flabbergasted co-ed, “Here’s a piece of paper with some staples in it.”

Supporting players include Krysten Ritter as Ike’s resented and resentful daughter Melanie, whose “I don’t find you charming” initial assessment of Philip fortunately does not progress in a predictable manner. Likewise, Joséphine de La Baume is Yvette, one of Philip’s fellow faculty members who is not quite the fantasy French girlfriend he has fantasized about since he was 14.

The movie’s closing narration describing Philip’s fate is as unsentimentally succinct and chilling as the last lines of “Barry Lyndon,” the story of another amusingly delusional cad who seemed bent on “destructiveness and self-sabotage.”

Bibliophiles will want to stick around during the end credits to see the appealingly retro dustjacket images of several novels written by some of the movie’s characters. They are as stylized and yet convincing as their imaginary authors.