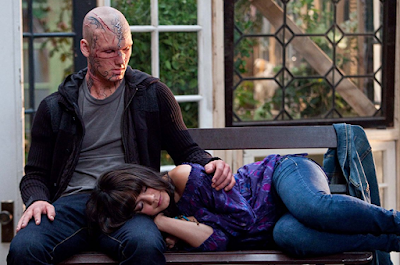 Truly, this is a monstrously bad movie.
©2011 CBS Films

Note: I originally did this review for a website with the odd name WeAreGoodkin.com. I went looking for it in September 2018 because Jenny Nicholson, aka My Favorite Critic Ever, did a hilarious YouTube video about the movie, and I wanted to re-read what I had said about it. Unfortunately, WeAreGoodkin.com has vanished from cyberspace, so I am re-posting the review here.

Director/screenwriter Daniel Barnz, who showed such promise with his stylish, honest and genuinely moving first feature "Phoebe in Wonderland," resorts here to a mismatch of slick cynicism and unconvincing sentimentality that fails as drama, romance and even post-modern parody. Adapted from the young adult novel by Alex Flinn, "Beastly" combines every CW network cliché -- "Gossip Girl" materialism, "One Tree Hill" melodrama and "Smallville" metahuman malarky -- without managing to make the resulting teen-trash concoction the least bit interesting.

As someone who obviously hasn't seen "Carrie," Kyle asks Kendra to be his date at a school dance as a prank, then attempts to humiliate her as a "self-mutilated, tatted Franken-skank" when she arrives. Big mistake. Kreepy Kendra puts a "Beauty and the Beast" spell on Kyle that makes him look like a bald, scarred, metal-adorned and heavily inked Burning Man refugee. (The making-of mantra during the movie's production was "no fur," differentiating this beast from those of the Cocteau and Disney variety.) If he doesn't get someone to say "I love you" to him in 12 months, he will stay that way forever.

Kyle is exiled by his embarrassed "people like people who look good" news-anchor father (Peter Krause) to a briar-covered New York brownstone. His only companions are a wisecracking blind tutor (Neil Patrick Harris) and a Bob Marley soundalike housekeeper (LisaGay Hamilton). Are we having fun yet? No.

Sneaking out after dark in a concealing hoodie, Kyle inexplicably begins pining for formerly overlooked classmate Lindy (Vanessa Hudgens). We're supposed to think this reveals new maturity and broad-mindedness on Kyle's part, even though Lindy is even more lovely than Kyle's former pre-spell squeeze. From what we see of her, boringly blank Lindy's only defining character traits are a fondness for Jujyfruit and an intense desire to visit Machu Picchu.

Trying to put the classic fairy tale in anything even loosely resembling a real-world context ends up ruining this re-telling. The eye-rollingly contrived manner in which Lindy finds herself forced to share living quarters with Kyle is too ridiculous to explain. Lindy's ability to continue communicating online with friends while she is a (willing) prisoner in Kyle's house is similarly silly, considering that she's supposed to remain incommunicado for her own protection. And Lindy's lack of curiosity about Kyle, who pretends to be someone else while they are shacked up together, is hard to fathom.

Worst of all, it's impossible to respect Lindy as a person when she reveals that she was attracted to Kyle back when he was a good-looking but loathsome jerk. She even has a photo of herself with nasty Kyle from those days as wallpaper on her laptop. "I respect that he called things as he saw them, even if he saw them wrong," she says, even though that pre-uglification Kyle was a rude reprobate with no redeeming qualities. This should give comfort to every belittling, emotionally abusive creep in the audience.

There also is a fundamental problem with "Beastly"'s twist on the "Beauty and the Beast" template. The movie's moral falls apart because "Beauty" is, well, beautiful. If Lindy had a good personality but looked like a frightful frump, instead of like Zac Efron's attractive ex, Kyle's love for her would prove he had outgrown his own shallow obsession with appearances. Instead, he's just hooking up with a different hottie. The real lesson of the movie isn't that looks don't matter, it's that hideous but thoughtful people can land babes. Further muddling the beauty-is-only-skin-deep moral, the "beast" is rewarded for his redemption by becoming as handsome as a hair-product model again. Huh?

The only impressive thing about "Beastly" is that it seems to last forever, even though it's a scant 86 minutes long. "Beastly," indeed.