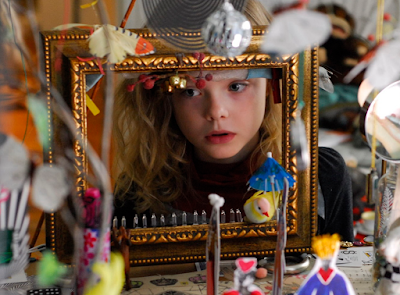 Note: I originally wrote this review for the website ArtistDirect.com, which now seems to have wiped all non-music-related content from its pages, so I am re-posting it here (followed by a feature article about the movie that I did for the same site).

It may sound premature to proclaim that Elle Fanning delivers a career-making performance at age nine, but that's exactly what this amazing young actress accomplishes with "Phoebe in Wonderland." She portrays the troubled title character with a sensitivity and complete lack of artifice that make Phoebe seem heartbreakingly genuine. This kind of role could have been disastrously mishandled by a showier, less empathetic young actress, but Fanning makes not a single misstep. She is a marvel.

Imaginative Phoebe can't help being impatient with boring schoolteachers who are determined to transform her into an obediently quiet "Good Job Jenny." Her interest is piqued when a deliciously deadpan drama teacher (Patricia Clarkson) visits the classroom, reverently reciting nonsense lines from "Jabberwocky" as if they make perfect sense. When she announces that auditions are being held for parts in an "Alice in Wonderland" school play, Phoebe is both fascinated and fearful.

Part of her reluctance over trying out is because she realizes how devastating failure would feel. Phoebe not only has trouble with anger management (her parents are summoned to school after she spits on a teasing classmate), she also is obsessed with counting, clapping and other rituals. She realizes that her compulsive behavior doesn't make sense, but can't stop herself from doing things like washing her hands to the point where they are cracked and bloody.

Yes, that sounds like the basis of a "disease of the week" TV episode, but the subject matter turns out to be wrenchingly convincing here. We can't help feeling sympathetic embarrassment for Phoebe's illogical impulses and outbursts, because Fanning makes us care so much about the fragile character.

Contrasting with her emotional off-stage turmoil, Phoebe's unselfconscious portrayal of Alice during rehearsals is as much a joy for us to watch as it is for her delighted drama teacher. Resented by other jealous girls who wanted the role, Phoebe's only friend is a boy (Ian Colletti) who gets his wish to play the Red Queen. The two of them thrive under the teacher's hands-off approach, which gives Phoebe a self-assurance that's inspiring. The tragedy is that we know her underlying problems are sure to manifest themselves again.

Felicity Huffman plays Phoebe's caring but frustrated mother, who refuses at first to acknowledge that there's anything wrong with her daughter. Phoebe's father (Bill Pullman) is more stoic about the situation, but no less concerned. A scene in which he tries apologizing to Phoebe for an unintended insult is heartrending, and her response is tearfully devastating.

Writer/director Daniel Barnz says he wrote the first draft of "Phoebe in Wonderland" before Fanning was born, but that the movie took a decade to get made. Sometimes, wonderful things come to those who wait.

FEATURE ARTICLE:
Elle Is in Wonderland

"Phoebe in Wonderland"'s 10-year-old star Elle Fanning already has appeared in movies starring Sean Penn ("I Am Sam"), Brad Pitt ("Babel" and "The Curious Case of Benjamin Button"), Eddie Murphy ("Daddy Day Care") and Jeff Bridges ("The Door in the Floor"). TV-wise, the young actress has been on "House M.D.," both the Miami and New York versions of "CSI," and other series. That means she naturally must have been in a few school plays by now, right?

"I'm in elementary school, so we don't really have the plays yet," she says. "But when I get older, in like middle school, we'll have plays, so I'll probably do some."

When it comes to choosing which movie projects she will do, Fanning says she and her mother decide together. "But it more comes down to my opinion," she notes, "because my mom says, 'Well, it's only if you feel like you want to do this.'"

Portraying the psychologically troubled Phoebe, who is more at ease in her school's "Alice in Wonderland" play than at dealing with real life, presented Fanning with more than the usual acting challenges. "I met with some kids that sort of had the same issues as Phoebe," Fanning says. "We went and talked with them for about an hour or so. It really helped me a lot. They're just like everyone else. They're my same age, they went to a school like me. They would be my friends."

"Desperate Housewives" star Felicity Huffman, who plays Phoebe's concerned and sometimes distraught mother, admits that it was hard not to take home some emotional residue after playing intensely dramatic scenes for up to 14 hours a day. She cheerfully points out that Fanning had no such problem. When director/writer Daniel Barnz would yell "cut," Huffman recalls, "Elle would jump up and go, 'That was fun! Can we do it again?' It was such a lesson to me about the joy of acting."

Fanning confirms this when asked if she thinks she might be missing out on being a kid. "Not really," she replies. "It's not really working to me. It's more just having fun and playing.

Fanning says she has no plans to work with her older sister Dakota Fanning, and that they don't talk about their acting careers at home. Instead, she says they discuss "normal sister stuff; what happens at school, things like that."

Writer/director Daniel Barnz wrote "Phoebe in Wonderland" a year before Fanning was born. One good thing about taking more than 10 years to get financing for the film, he says, was that it gave him the opportunity to rewrite the parents' roles from the perspective of a parent with young children himself.

Also, as important as the "Alice" metaphor is to the movie, Barnz' long-ago first draft did not include it. Happening to read a review of a production of "Alice in Wonderland" was like an epiphany for him. "Since this was a story about a girl who couldn't fit in, of course she would want to retreat to Wonderland in her imagination," Barnz says. "This is a world where everything is the opposite and rules are broken, everything is kind of topsy-turvy. And of course that would be exciting for her."

Barnz was warned that a movie with a child in the lead and 20 children in the cast might not be the ideal project for a first directing job, but he found that the energy from the kids made the experience magical. "With Elle in particular, it was such a blessing to be working with her, and such an incredible process to see her craft this performance," he says. "She would show up on set in certain moods to play certain scenes, and she would go off between takes and do certain rituals to stay in character."

Barnz says one thing he didn't realize when Fanning was cast was how well she could sing. "She's so good that we actually would sort of say, 'Could you make it a little bit less good, so it sounds like a real kid?"

Fanning will be doing more singing later this year in the movie version of "The Nutcracker: The Untold Story," which opens this Christmas. A musical with lyrics added to the original ballet score, the movie co-stars Nathan Lane and John Turturro.